Just added to your cart

Is This Really a DIY Fail?

I don't think so and today I'm gonna tell you why nothing you attempt is ever a fail. It may not work. It may be butt ugly, but if you gave it a shot, it'd not be a fail.

Or remember RegrEtsy? There is something so deliciously funny in seeing curated and completely photoshopped inspiration projects executed by real people. I think the joke is really on the original poster because the execution shows the inauthenticity of the "So easy anyone can do it" DIY project without a DIY fail.

Unfortunately though, this comparison (albeit hilarious sometimes) does equate to people giving up when they can't get it even close to the bar that sites like IG or Pinterest set.

We all hope to be “discovered” someday, right?

Don’t we all dream of the day a talent scout or an HGTV exec stumbles across our IG feed or out Tiktok on their FYP and does a dead scroll stop. “I must make this fantastical artist world famous!!!” they obviously mutter to themselves. “She is just so colorfully creative and uplifting, and that hair, oh that hair!” Yeah ok, this is my fantasy, go get your own. 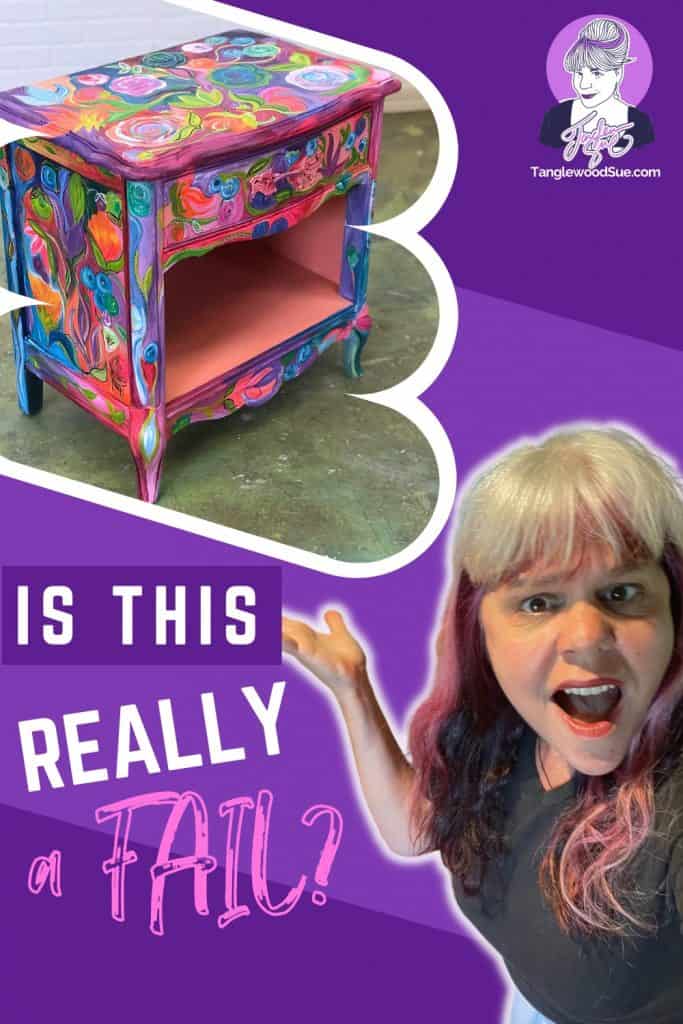 Anyway, I thought my fantasy was coming true when I got a text from the producer of the Drew Barrymore show!

I mean before I even texted back, I had already fully immersed myself in the fantasy of me and Drew, sittin’ side by side on her set. Our legs curled under us on the chairs just so we could prop ourselves up even more in order to huddle in closer cause we are so excited to finally meet each other and chat about all things creativity and movies. I’m telling her how I knew she was my soul sistah when I first saw her in Firestarter and asking what it's like to work with that hottie Timothy Olyphant on the Santa Clarita Diet and she telling me that I just crack her up, and she loves watching me on Youtube and that I really deserve more followers and would I please demo my latest painting technique for the studio audience who all want to learn how to paint furniture…

Alas, If I want ANY of this to happen, I must text this guy back, if only so we can discuss dates and wardrobe and such.

I finally text him back and this is what he says “I found you on tiktok and love what you do, especially that painted toilet paper chair…”

OK, this is it, I think. Here comes my invitation to stardom via the Drew Barrymore Show.

He then asks if I can send him more fails. Yes, they are doing a show on #DIYFAIL!!!

He wants me to be the poster child for DIY FAIL!!??

Sure, I’m game. I’ll throw in my integrity badge for my 7 minutes.

So, I send him a bunch of my “failures” that I upcycled into fantastical creations.

“No”, he politely said, “Can you send a video or image of a piece that never worked out. That #failed”

Ummmm. Yeah. Lemme check. But, as you can guess, I had nothing to send him.

Because I never fail? Oh Hell no! Because as a general rule, I fail on EVERY SINGLE PIECE I CREATE.

I push the limits of every piece so far it's inevitable that somewhere along the way I will fail.

Here are my favorite ways I fail often 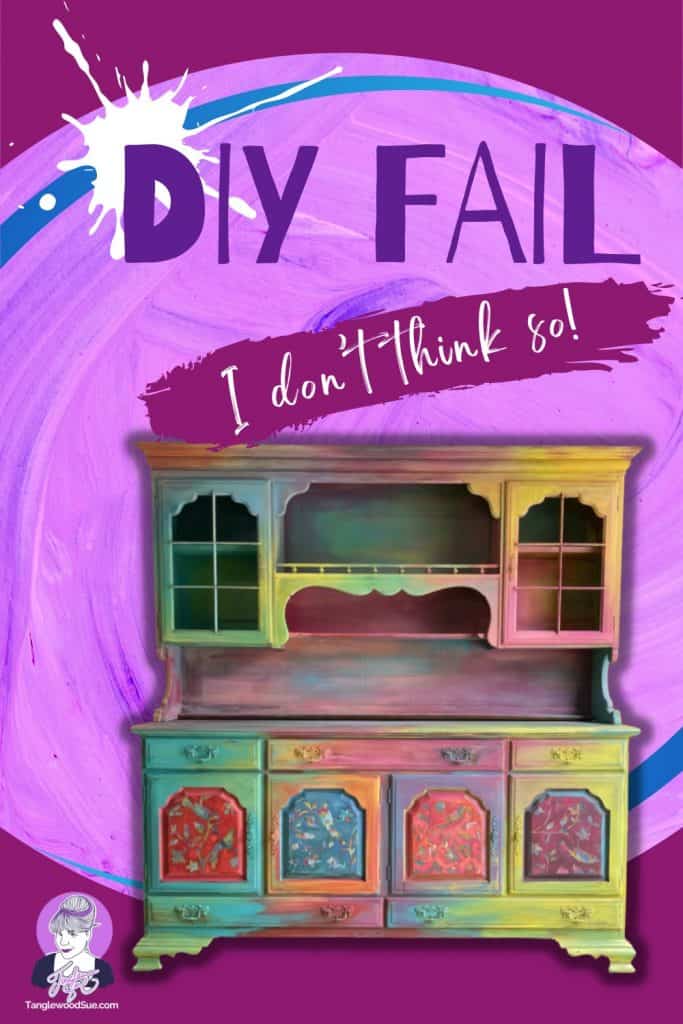 But. And this is a big BUT. Not like my scrawny butt.

I just can’t. Furniture pieces and murals and painted couches have woken me up in the middle of the night, telling me what they wanted me to do to them. Whispering into my dreams “Just add more blue to the right, are you gonna get this done in time, don’t forget to sand me before the next coat or I won’t be soft anymore” But mostly what they say is “You haven’t gone far enough”

If you are about to have a DIY fail, you must go farther

Honestly, that’s always the answer. I think of any piece like a merry-go-round. You have a lot of turns on the ride and how your piece turns out is not based on how inherently good you are at any given craft, but when you get off the merry go-round. 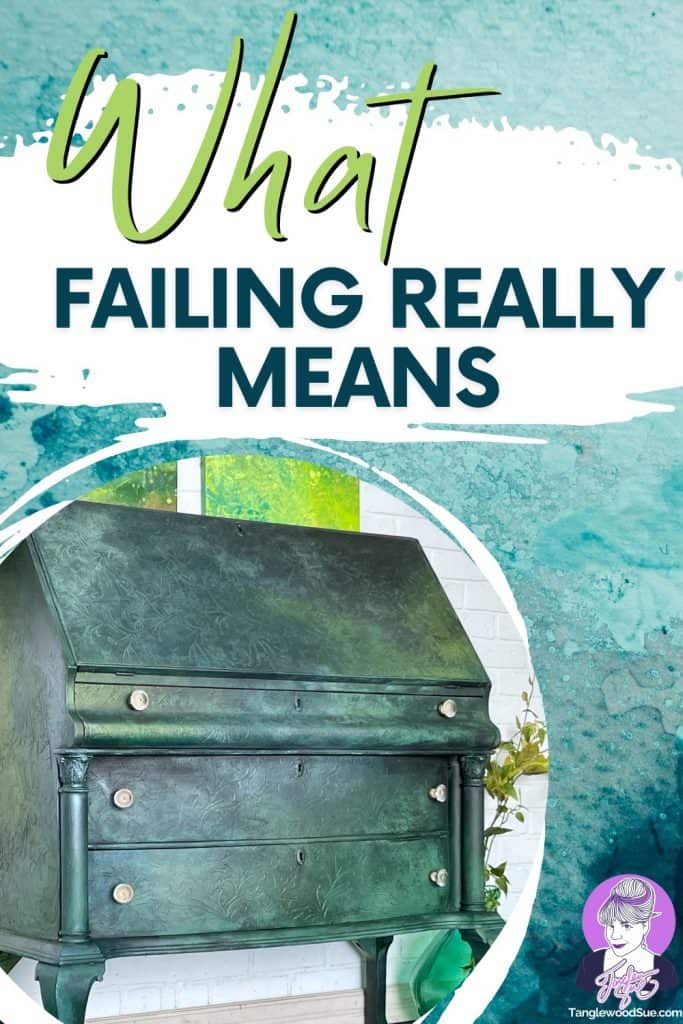 Do you get off at “Ok, looks great, haven’t screwed it up yet so I better stop” (you paint a lot of pieces white don’t you?) Well, you will never fail my friend, but you will also never feel the joyous triumph of overcoming a failure either. I’m just saying.

Do you get off on “Ok lemme try something new/dammit/that looks like shit/I’m out”? Did you just leap off at failure? Well, call Drew’s producer cause you are the one they were looking for!!!

I think the real trick is to stay on a few more rotations. I mean. If it looks like a shit show, what do you have to lose by trying a few more things to get your piece back on track? This is my sweet spot.

Because “If you are not willing to completely fuck up your art, you are not creating hard enough” yes. You may use my quote as long as you give me full credit It bears repeating:

“If you are not willing to completely fuck up your art, you are not creating hard enough”

Honestly though. Just wait a few more stops on the merry-go-round. Bring your fails back around. Try a new technique. Add a different color, some stencils, use what you thought would be your final coat as your base coat.

I guarantee. Honestly. Without fail. I guarantee that if you KEEP GOING, you will get there and you will have learned so much more about you, your style and creating than if you had just jumped off before there was ever a fail to overcome.

It’s scary, I know. So is parenting, and running small business, and driving and existing. Painting is the least risky of them all. No-one’s gonna die though. It’s just furniture, or a canvas. The worst that can ever happen is that some small-minded soul insults you on FB cause she never had the guts to try what you did and her inner child needs to put you down rather than admit to herself that she failed by never even trying.

Here's what happened next...

So I basically wrote all of this in a text (yeah, I’m an epic texter) to the producer. I just knew he needed time to rewrite the arch of the show so that he could turn this #fail episode into “The Joy of Failure” brought to you today by our new favorite creative Tanglewood Sue!

But… he never wrote back. I edited a new video for him just in case,(i'm including that here for you now instead) but he never did. Producers are like that. They have pre-written story and want you to fill it. If you don’t fit it, or are not willing to fit it, they find the next gal who is.

I debated sending in images of my work mid progress, just to avoid giving away my shot, but decided that it was not for me and this was not my moment. Instead, it is a blog post with an accompanying video meant for the big time but, for now, relegated to my small but earnest YouTube following, and my dear readers :)

Love to you all, How to use Alcohol Ink in your Furniture Makeover

How to Use Alcohol Ink in Your Furniture Makeover An... Paint Pouring With Daydream Apothecary Paint - Pour Your Heart Out Today is the day. The last full day of my... How to Decoupage Furniture with Fabric

How to Decoupage Furniture with Fabric In today's post, I... Making Chickenwire Dress Sculptures for your Yard Our Spring Version...
Back to Let's Paint Furniture
Use left/right arrows to navigate the slideshow or swipe left/right if using a mobile device